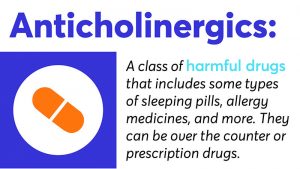 Anticholinergic medications have been linked to worsening cognition over time, including the diagnosis of dementia, in several prior observational studies. If the study team finds that reducing or discontinuing the use of these commonly prescribed drugs among current users improves brain health without adversely impacting other medical conditions, the team will have identified a way to decrease an estimated 50,000 new cases of dementia annually in the United States alone. 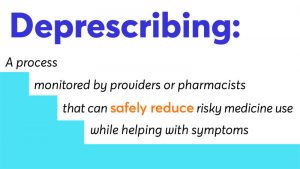 Anticholinergics, drugs which affect the brain by blocking acetylcholine, a nervous system neurotransmitter that influences memory, alertness and planning skills, are prescribed for many conditions common in older adults including depression, urinary incontinence, irritable bowel syndrome and Parkinson’s disease. These medications are used by approximately one in four older adults each year, and nearly half of older adults have used this type of medication at least once in a five-year period.

“In several studies conducted to date, we and many other researchers around the world have found a correlation between anticholinergics and cognitive impairment, but this will be the first randomized clinical trial to determine whether reducing or stopping these medications improves cognition, which would establish a true causal relationship between anticholinergics and dementia,” said Dr. Campbell. “At the end of the trial, if we find that stopping anticholinergics improves brain health without negative consequences on other aspects of their health, we will have demonstrated a mechanism to improve cognition and potentially delay or prevent dementia in a subset of older adults.” 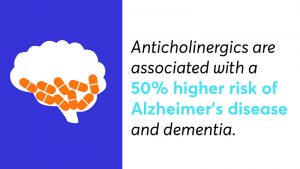 In the “Reducing Risk of Dementia through Deprescribing” study — R2D2 for short — clinical pharmacists will work with physicians and their patients who are current users of anticholinergics to identify and switch to safer alternative medications.

R2D2 will enroll 344 older adults who are currently using at least one anticholinergic medication to determine the impact of deprescribing on cognition at 6, 12, 18, and 24 months. The trial, which will be conducted at Eskenazi Health and Indiana University Health, will also monitor the effect of deprescribing on depression, anxiety, pain, insomnia, and quality of life.

Despite growing awareness of adverse cognitive effects linked to anticholinergics, there has been no decline in prevalence of anticholinergic prescriptions over the last two decades. However, as Dr. Campbell has noted, it is not yet known whether stopping these medications in current users results in acute and sustained improvements in cognition. 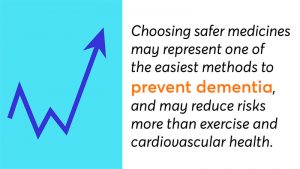 “In addition to determining whether there is a cause and effect relationship between anticholinergics and cognitive impairment, this study will give us insight into whether pharmacists working with physicians can be more successful than physicians alone in taking patients off anticholinergics,” said Dr. Campbell. “From this study, which aims to both improve clinical outcomes and optimize the role of pharmacists in primary care settings, we will learn a lot about the clinical and operational impact of pharmacist-driven deprescribing practices in primary care.”

In addition to Regenstrief research scientist Dr. Campbell, who is an assistant professor of pharmacy practice in Purdue University’s College of Pharmacy, other investigators on the team include Regenstrief Institute investigator Malaz Boustani, M.D., MPH, Fred Unverzagt, Ph.D., Sujuan Gao, Ph.D., and Chris Steinmetz, M.D. All are faculty of the Indiana University School of Medicine.

Dr. Tom Imperiale on tailoring colonoscopy screening for 45- to 49-year-olds

Hospitalizations, ICU admissions, and hospital deaths lower for those who are vaccinated and boosted Individuals who, despite having been

Dr. Tom Imperiale on tailoring colonoscopy screening for 45- to 49-year-olds