Clement McDonald, M.D., honored for his pioneering work in medical informatics at Regenstrief Institute to improve health in Indiana and around the world 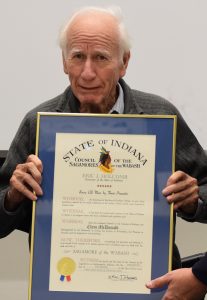 Clement McDonald, M.D., a pioneer in the use of health information technology to improve healthcare, who developed one of the world’s first operational electronic medical record systems and conceived a common language for the exchange of health information that’s operational in nearly every country in the world, is being honored by the state of Indiana with its prestigious Sagamore award. His accomplishments are also being recognized by Regenstrief Institute at the December installment of the Regenstrief Educational Insights and Learning Series.

Based on the Regenstrief Medical Record System, he and Regenstrief colleagues created what has become one of the largest and most comprehensive clinical information systems in the world, the Indiana Network for Patient Care (INPC). Now operated by the Indiana Health Information Exchange, the INPC, with data from healthcare systems, laboratories and public health offices throughout Indiana, serves as a living model for health information exchange throughout the world – ensuring patient data is available when and where needed. In the present era when patients see clinicians in multiple healthcare systems and locations, Dr. McDonald’s concept of having health information securely available instantly – and his implementation of the concept – are essential. Research access to the vast data trove is managed by Regenstrief Institute.

To facilitate interoperability in healthcare, in 1994, Dr. McDonald created LOINC® at Regenstrief Institute, the ever-expanding open access terminology system. Short for Logical Observation Identifiers Names and Codes, LOINC provides standard identification of health measurements, observations, and documents. Today, LOINC, which continues to be managed by Regenstrief Institute, is used in 193 countries and is available in 20 languages. Dr. McDonald remains an active member of the LOINC community. In October at the LOINC conference in France, a code was named in his honor.

About Regenstrief Institute
Founded in 1969 in Indianapolis, the Regenstrief Institute is a local, national and global leader dedicated to a world where better information empowers people to end disease and realize true health. A key research partner to Indiana University, Regenstrief and its research scientists are responsible for a growing number of major healthcare innovations and studies. Examples range from the development of global health information technology standards that enable the use and interoperability of electronic health records to improving patient-physician communications, to creating models of care that inform practice and improve the lives of patients around the globe.

Dr. Shaun Grannis on the need for standardization in U.S. patient data matching

A study conducted by Regenstrief Institute research scientists to examine the use, by older adults with Type 1 or

Advocating for and supporting health equity Regenstrief Institute Research Scientist Kathleen Unroe, M.D., MHA, is a co-author of a

Dr. Shaun Grannis on the need for standardization in U.S. patient data matching