Study: What patients really think about opioid vs non-opioid medications for chronic pain

Prescriptions of opioids for chronic pain has increased dramatically since the 1990s in spite of their known harms. Despite a shortage of scientific studies on the long-term effectiveness of opioids such as morphine, oxycodone and hydrocodone, they are frequently perceived to be stronger, more powerful pain relievers than non-opioid alternatives like acetaminophen or ibuprofen.

A new study investigates pre-existing perceptions about pain medications by individuals with chronic pain and how these perceptions relate to patients’ experiences with these medications.

“‘I Was a Little Surprised’: Qualitative Insights from Patients Enrolled in a 12-Month Trial Comparing Opioids to Non-Opioid Medications for Chronic Musculoskeletal Pain” has been published online ahead of print in the Journal of Pain, the peer-reviewed journal of the American Pain Society.

The study provides insights into the results of “The Strategies for Prescribing Analgesics Comparative Effectiveness” (SPACE) trial, a landmark randomized controlled trial comparing benefits and harms of opioid versus non-opioid medications over 12 months for chronic musculoskeletal pain. SPACE, the results of which were published earlier this year in JAMA, found that opioid medications were not better at improving pain that interfered with walking, work or sleep over 12 months for individuals with chronic back pain or arthritic hips or knees compared to non-opioid medications. SPACE also found that adverse medication-related symptoms were more common in the patients who took opioids.

The Journal of Pain study explores patients’ experiences, including their perceptions of medications and experiences with the SPACE study itself. It found that, despite strongly held beliefs about opioid and non-opioid medications, patients were often surprised by their results.

The study also found that the patient-provider relationship, in this case a novel patient-pharmacist telecare collaborative management care model, may have an important influence on patient’s perceptions of and responses to pain medications.

“Given evidence suggesting that treatment expectations can influence treatment response, we sought to gain a more complete understanding of the potential role of expectations  and perceptions of opioids held by patients with chronic back, hip and knee pain,” said Journal of Pain study corresponding author Marianne Matthias, a research scientist with the VA Center for Health Information and Communication at the Richard L. Roudebush VA Medical Center and with the Regenstrief Institute’s Center for Health Services Research.

“We found that personalized care by someone who cares — in this case by a pharmacist — often meant more to patients than the actual medications they were taking. Patients seem to value working with someone who cares about them and can help to meet their physical and emotional needs.”

In the Journal of Pain study, Dr. Matthias and colleagues interviewed 34 SPACE participants, all of whom were patients at a VA hospital. One patient who was treated in SPACE’s opioid arm and transitioned to non-opioid medications after study completion described his experience with both treatment approaches, including his surprise that the non-opioid medications seemed to be as effective as the opioid he had been taking.

Patient: “Well, the hydrocodone was probably most effective because it was more powerful of any that I’ve taken. And, you know, it does more than just relieve the pain on my knee, it relieves anxiety and, you know, a few other things.”

Interviewer: And, now, when you switched over from the hydrocodone to the acetaminophen and lidocaine, were the results any different than what you expected?

Patient: “No, the results were about what I expected. The extra heat on my knee that provided some relief and the acetaminophen…between the two of them, it did the same about as the hydrocodone. I was a little surprised.”

Another individual, who received non-opioids said:

Patient: “I can pick my kid up, throw him around, spin him around, whatever, and I feel great…. I even feel like getting teary because I’m just so happy. I am. I’m able to do a lot of things that I couldn’t. A lot more things than I thought I would be able to even [do]…. I’m also a lot more muscular than I was a year and a half ago, too.”

He went on to describe how his results surprised him.

“I was expecting it not to be 180-degree turn because I went from being just miserable every day to being just, for the most part, happy. I can basically just bounce right out of bed.”

In addition, this patient described a change in his beliefs about opioid and non-opioid medications.

“I assumed…opioids were powerful. So they were necessary for extreme pain when that’s not the case. So I do have a lot more respect, I guess, for non-opioids.”

Co-authors of the Journal of Pain study, in addition to Dr. Matthias, who is associate professor and director of graduate studies in the Department of Communication Studies in the School of Liberal Arts at IUPUI and an associate research professor with IU School of Medicine, are Melvin T. Donaldson of the University of Minnesota and Agnes C. Jensen of the Minneapolis VA Health Care System and Erin E. Krebs of the Minneapolis VA Health Care System and University of Minnesota.  Krebs, who led the SPACE trial, is a former Regenstrief Institute investigator. 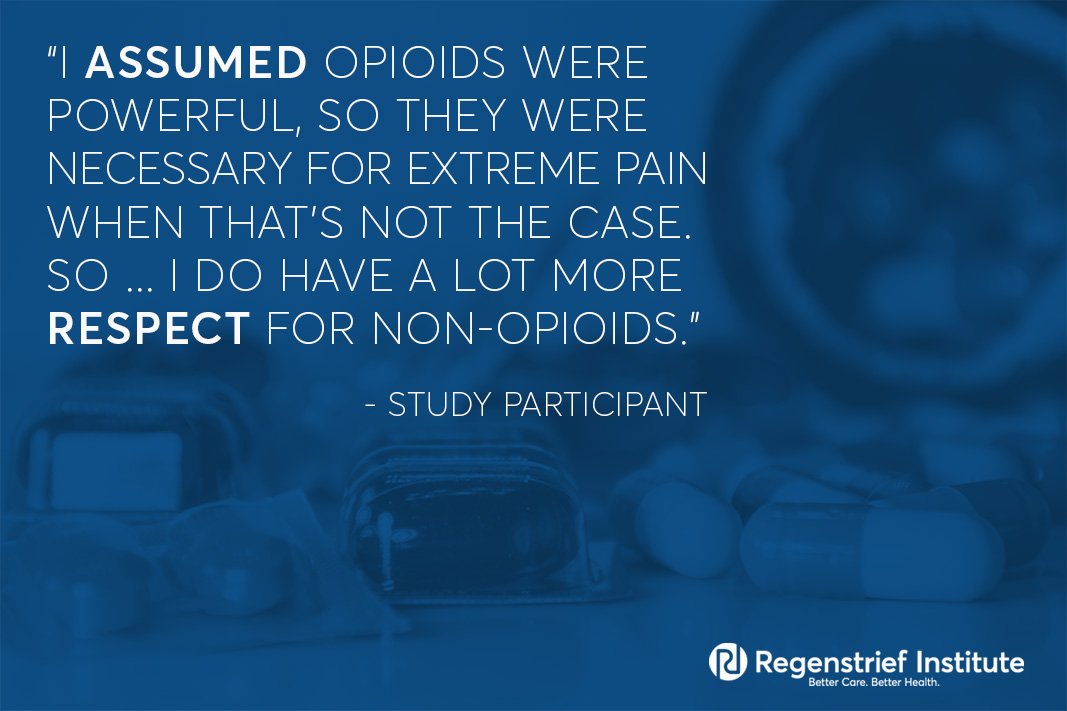 Mar 25, 2020 • News
More than 600 international registrations for Regenstrief specialized virtual conference to address coronavirus outbreak
LOINC®, an international health data standard maintained at Regenstrief Institute, is hosting a special public meeting to address the coronavirus pandemic. More than 600 people from around the world are signed up to attend the virtual event on March 26 related to LOINC coding for SARS-CoV-2/COVID-19. In response to the coronavirus pandemic, LOINC has created…
Continue Reading >
Mar 18, 2020 • News
LOINC team actively working to expand tracking codes for coronavirus
With the coronavirus now a pandemic, the LOINC team at Regenstrief is working continuously to create new codes to help public health officials around the globe track cases of the virus. Coordinating with the U.S. Centers for Disease Control and Prevention (CDC), public health and reference labs, and in vitro diagnostic manufacturers, the team has…
Continue Reading >