INDIANAPOLIS — A growing number of individuals of all ages are surviving intensive care unit hospitalization, however their mental and physical health problems persist. A new study from Regenstrief Institute and Indiana University researchers reports that a care model they originally developed for older adults with dementia could benefit ICU survivors of all ages.

ICU survivors have high rates of persistent cognitive impairment similar to Alzheimer’s disease due to a combination of critical illness, medications administered during hospitalization, and physiological aspects of delirium that are not well understood.

The Critical Care Recovery Center (CCRC) care model developed by the Regenstrief Institute and IU Center for Aging Research scientists is the nation’s first collaborative care concept focusing on the extensive cognitive, physical, and psychological recovery needs of intensive care unit survivors and decreasing the likelihood of serious illness after discharge from an ICU. The CCRC is an outpatient clinic with an interdisciplinary care team working closely with family caregivers as well as the ICU survivors themselves after hospital or rehabilitation facility discharge. 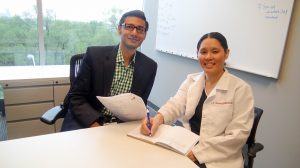 The 51 ICU survivors in the new study were the initial patients seen in the first CCRC — the Eskenazi Health Critical Care Recovery Center. They ranged in age from 40 to 70 with an average age of 55. Prior to the trauma or illness that had brought them to the ICU, nearly all were psychiatrically normal and functionally independent.

During their ICU stay more than three-quarters of the study participants had required mechanical ventilation and almost half were given antipsychotic medications for delirium. Following ICU discharge 88 percent had cognitive impairment and 60 percent experienced depression, recognized upon their subsequent follow-up as outpatients in the CCRC.

“The ICU survivor population is very heterogeneous which makes it a complicated population to understand and serve,” said Sophia Wang, MD, an implementation scientist at the Center for Health Innovation and Implementation Science and assistant professor of clinical psychiatry at the IU School of Medicine who led the study. “ICU survivors of all ages have high rates of persistent cognitive impairment similar to Alzheimer’s disease. Their complex needs match the traditional complexity of geriatric syndromes.”

According to Dr. Wang, the problems encountered after ICU discharge, known as Post Intensive Care Syndrome or PICS, should be viewed as a multifaceted disorder of cognitive, psychiatric, and physical impairment. Because the CCRC model is equipped to handle those complexities, it is a good fit for the ICU survivor population, regardless of the individual’s age.

“In this study we have demonstrated how novel concepts initially used to create a successful model of collaborative care for dementia were successfully applied to create the CCRC providing innovative collaborative care for ICU survivors,” she said. “We will be conducting future studies of how the CCRC meets the complex needs of ICU survivors and the healthcare systems they navigate.”

About 5 million adults are admitted to medical or surgical ICUs across the United States every year.

“The CCRC is an interdisciplinary model of care focusing on the unique needs of ICU survivors, a growing population that does not receive specialized care it deserves,” said study senior author Babar A. Khan, MD, of the Indiana University Center for Aging Research, Regenstrief Institute, Center for Health Innovation and Implementation Science and IU School of Medicine.”Our local example demonstrates how a healthcare system can be leveraged to develop and sustain a new model of care.

“The CCRC model can be modified and adapted at different healthcare systems depending on their individual culture so that ICU survivors receive the care they need and deserve. Doing so may help in reducing the societal, financial, and economic burden posed by the post-intensive care syndrome.” Dr. Khan is an intensive care physician who developed the CCRC model and the medical director of the Eskenazi Health Critical Care Recovery Center.

Mar 25, 2020 • News
More than 600 international registrations for Regenstrief specialized virtual conference to address coronavirus outbreak
LOINC®, an international health data standard maintained at Regenstrief Institute, is hosting a special public meeting to address the coronavirus pandemic. More than 600 people from around the world are signed up to attend the virtual event on March 26 related to LOINC coding for SARS-CoV-2/COVID-19. In response to the coronavirus pandemic, LOINC has created…
Continue Reading >
Mar 18, 2020 • News
LOINC team actively working to expand tracking codes for coronavirus
With the coronavirus now a pandemic, the LOINC team at Regenstrief is working continuously to create new codes to help public health officials around the globe track cases of the virus. Coordinating with the U.S. Centers for Disease Control and Prevention (CDC), public health and reference labs, and in vitro diagnostic manufacturers, the team has…
Continue Reading >