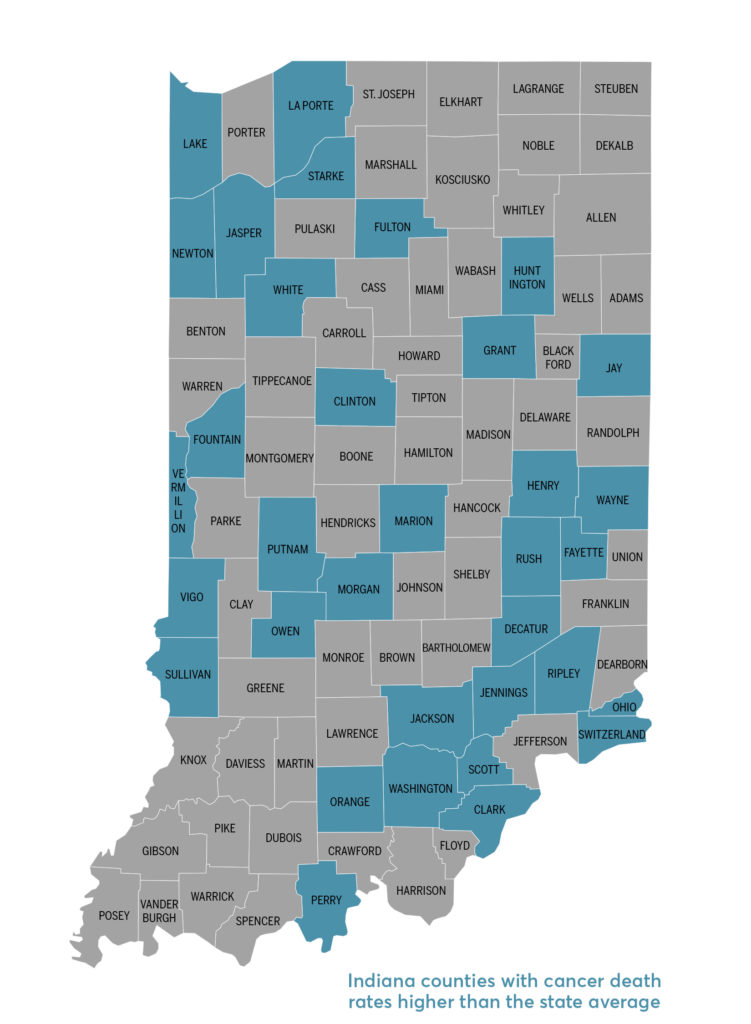 A population health study from IUPUI and the Regenstrief Institute has identified striking socioeconomic and racial disparities in health behavior and in the receipt of cancer screening in the 34 Indiana counties with cancer death rates higher than the state’s average. Overall, the state of Indiana ranks high — 11th nationally — in cancer deaths.

The research provides unique insight into health status, health care access and health information gaps — information essential for addressing cancer health disparities and improving outcomes — of residents of the 34 Indiana counties with cancer death rates higher than the state average. These counties are both urban, including the counties in which the cities of Indianapolis, Terre Haute and Gary are located, and rural, including the state’s smallest county with only slightly more than 6,000 residents, and are spread throughout the state.

“We found that black residents in Indiana don’t get cancer more often; in fact, they have lower incidence of many cancers, but disturbingly, they die from cancer at a higher rate,” lead author Susan Rawl, Ph.D. said.

“We also confirmed that in the 34 Indiana counties with cancer death rates above our already high state average, irrespective of race, individuals with low income and low education had poor access to health care.” Dr. Rawl is a professor of nursing at the Indiana University School of Nursing and co-leader of cancer prevention and control at the IU Melvin and Bren Simon Cancer Center.

Among other study findings:

“Racial and Socioeconomic Disparities in Cancer-related Knowledge, Beliefs, and Behaviors in Indiana” is published in a special issue, focusing on population health assessment, of the peer-reviewed journal Cancer Epidemiology, Biomarkers & Prevention. The research was funded by a grant to the IU Simon Cancer Center from the National Cancer Institute.

The study surveyed 970 individuals who had at least one health care encounter in the Indiana University Health system within the past year and thus had an electronic health record. This interaction with the health care system may explain, in part, why women who participated in the study had higher rates of mammography screening than the state and even the national average, in spite of living in counties with higher cancer death rates.

“Truly understanding populations in geographic areas where the cancer burden is disproportionately high is essential to the effective use of public health resources to lower their cancer death rates and other health disparities,” said Regenstrief Institute investigator David Haggstrom, M.D., senior author of the study. “In the future, surveying individuals who have electronic health records provides us with a comprehensive picture over time, including in-depth insight into how their health care and health behaviors interact.” In addition to his Regenstrief Institute appointment, Dr. Haggstrom is a U.S. Department of Veterans Affairs investigator, an IU School of Medicine associate professor of medicine and an IU Simon Cancer Center member.

“Some of what we learned was not surprising, for example, that those with higher income had more encounters with the health care system, but other study findings — for instance, that black women were more likely to receive cervical cancer screening than white women, was unexpected. What we have learned from this survey about the knowledge, beliefs and behaviors of individuals provides information that will be useful in designing strategies to reach men and women about their health and health care decisions, like smoking and screening,” Dr. Haggstrom said.

“To be effective, communications about health care — whether to a community or to an individual — need to be targeted and tailored,” said Regenstrief Institute investigator Joy L. Lee, Ph.D., a study co-author and health services researcher.

“What we have learned from this survey of nearly 1,000 people provides us information that we think will be useful in designing tactical strategies to target and effectively reach underserved individuals to improve their health.”

In addition to Dr. Rawl of the School of Nursing and Regenstrief investigators Dr. Haggstrom and Dr. Lee, co-authors of the study are Evgenia Teal and Layla Baker of the Regenstrief Institute and Stephanie Dickinson, Jamie Roberts and Sina Kianersi of Indiana University.

The authors hope that this 34-county survey will serve as a benchmark to be repeated biannually in order to monitor progress in the state. Additional studies using the data collected in the initial survey are underway.