INDIANAPOLIS — Researchers from the Indiana University Center for Aging Research and the Regenstrief Institute have performed the first study conducted in the United States under real-world conditions comparing patient adherence and tolerability to a class of drugs known as cholinesterase inhibitors. Although there are no known cures for Alzheimer’s disease or other dementias, drugs in this class may delay or slow the progression of symptoms in some individuals.

All three cholinesterase inhibitor medications approved by the US Food and Drug Administration require titration with patients working up from an initial dose to a target dose to receive full benefit. According to the manufacturers this can be achieved in 4 to 8 weeks. Yet, surprisingly, the new study, published online ahead of print in the Journal of the American Geriatrics Society, found that by 18 weeks, only one-half of individuals on any of the three drugs were continuing to take them. 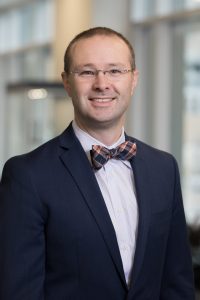 “While these medications do not change the course of the disease, by not getting patients to target doses, we aren’t optimizing the potential benefits these medications may provide,” said IU Center for Aging Research and Regenstrief Institute scientist Noll Campbell, PharmD, who led the study. “Unlike the clinical trials conducted by drug companies for FDA approval, this study was conducted with participants who were taking an average of 8 other medications – what we would call a ‘real-world’ population — individuals who are sicker than those who typically participate in drug company trials. Having a better understanding of those to whom the drugs are targeted may provide us with greater insight into how to increase benefits and reduce risk.”

During the study, just over half of all participants experienced a side effect which contributed to the decision to stop the medication. Muscular-skeletal side effects (general pain and muscle cramps) and neurologic side effects (dizziness, nightmares, headaches) were just as common as gastrointestinal side effects (vomiting, nausea, diarrhea). Side effects primarily occurred at starting dose or early on in treatment.

The 196 study participants were patients of memory practices in four large metropolitan Indianapolis health care systems. Three-quarters of those patients followed in the study were female, 31 percent were African-American, and 73 percent had completed high school. Mean age was 80. There was no difference in demographic or clinical characteristics by drug, which were randomly prescribed.

No variation was found in tolerability or adherence to the three drugs by sex, race, education or age.

Despite the high rate of side effects, the only reason for discontinuation that was different between the medications studied was cost. Individuals were more likely to start and remain on donepezil. This drug is most consistently included as a preferred medication (thus lowest cost to the patient) under many U.S. drug coverage plans.

Approximately 14 percent of those patients who were prescribed galantamine and 17 of those prescribed rivastigmine — the other two drugs in the class — stopped for cost reasons although some switched to the covered donepezil and continued to be followed by the researchers to determine tolerability to the drug. Without insurance coverage, all three drugs are similarly priced.

“Physicians should be aware of the impact of side effects, many of which are shared with other medications that the patient is taking, on both the adherence to the medication and quality of life,” Dr. Campbell, who is on the faculty of the Purdue University College of Pharmacy, said. “While these drugs aren’t the answer to Alzheimer’s disease, improving tolerability and adherence may reduce the complications of the disease.”

“The current US drug trial approval process is just too long — typically 17 years — and inefficient with only a 14 percent hit rate from discovery to successful delivery,” said study senior author Malaz Boustani, MD, MPH. “We need to test the efficacy of drugs in real-world populations — as we did in this study — at the earliest phase of clinical trials”. Dr. Boustani is the founder of the Indiana Clinical and Translational Sciences Institute’s IU Center for Health Innovation and Implementation Science, deputy director of the IU Center for Aging Research, an IU School of Medicine professor, and a Regenstrief Institute investigator.

The study was funded by Agency for Healthcare Research and Quality grant R01HS019818-01.