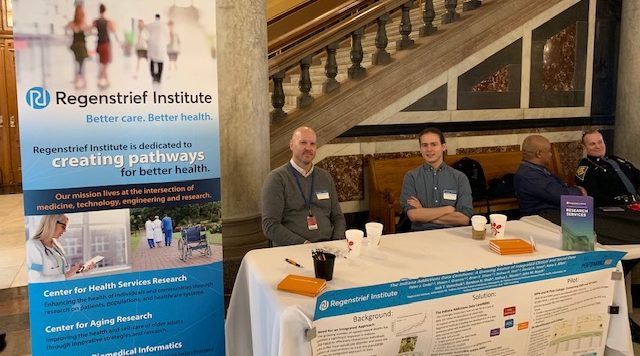 A team from Regenstrief Institute displayed its work with the state during MPH Data Day at the Indiana Statehouse. The event was organized by the Indiana Management Performance Hub (MPH) to highlight its partnerships with various state agencies and organizations and demonstrate how data plays an increasingly important role in state government.

MPH manages data from various state agencies and makes it publicly available. It works with its partners in various areas, including education and workforce, government transparency, Medicaid and the opioid crisis. 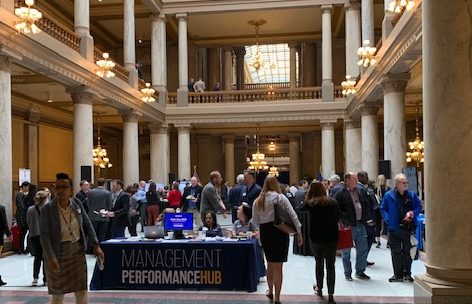 MPH has been working closely with Regenstrief through the Indiana Addiction Data Commons (IADC) to find solutions to the opioid crisis. The IADC is a partnership between several organizations, including MPH and Regenstrief, aiming to connect data from different sources to provide insight into the health crisis and address the problem from multiple angles.

“The goal of today was to demonstrate the potential of the IADC,” said Dan Hood, IADC program manager at Regenstrief.  “Through our partnership with the state, we hope to leverage data to improve outcomes for Hoosiers.”

This is the second year for MPH Data Day. Regenstrief was one of about 25 MPH partners who attended.

Regenstrief President and CEO Peter Embi, M.D., spoke more in-depth about the IADC on “The Problem” podcast from Regenstrief. Listen to it here:

MPH Chief Data Officer Darshan Shah and MPH Director of Engagement and Analytics Josie Fasoldt both appeared on “The Problem” podcast from Regenstrief to discuss the importance of data sharing in the effort to address the opioid crisis. You can listen to that episode here:

Jan 26, 2022 • News
AI models can predict individual risk of hospitalization for COVID using HIE data
Regenstrief study demonstrates how clinical data from healthcare systems can be used to better inform public health decision-making The COVID-19 pandemic has highlighted both the necessity and the difficulty of using clinical data to inform state and national public health policymaking. In a new study, Regenstrief Institute and Indiana University researchers demonstrate that machine learning…
Continue Reading >
Jan 24, 2022 • News
Local mask policy matters when it comes to public health
Findings from a new study show impact of mask mandates on behavior  Local mask policies are strong influencers on mask-wearing behavior, according to new research from Regenstrief Institute, Indiana University Richard M. Fairbanks School of Public Health and Resolve to Save Lives.   Policies requiring face masks in public have been one strategy to address the…
Continue Reading >