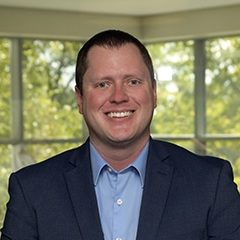 Dustin Ziegler leads numerous programs that optimize the reach and impact of CICOA services and resources. Examples of Ziegler’s innovative and strategic leadership include new and expanded partnership initiatives with the medical community through the establishment of CICOA’s clinical engagement program, the assembly and leadership of CICOA’s Medical Advisory Council, the strategic adoption and implementation of the statewide Dementia Friends Indiana movement, and the development of new collaborative opportunities between CICOA and academic and research communities.

While working with the Alzheimer’s Association Greater Indiana Chapter, Ziegler founded and led a program that partners with the medical community to connect families affected by dementia to the appropriate resources. This program was recognized as one of the most successful in the nation and was highlighted as a best practice at the 2016 Alzheimer’s Association International Conference in Toronto. Ziegler received his gerontology/health and aging education from Indiana University. Ziegler was also the 2019 Indiana University School of Medicine Bowen Center Award recipient in the state of Indiana for his leadership in advancing health innovation and policy through the Dementia Friends Indiana movement.