Regenstrief research scientist Nicole Fowler, PhD, was recognized as an outstanding woman of inspiration during an event organized by the Indiana Historical Society. The event, A Toast to NOW (Network of Outstanding Women), celebrated women and connected current female leaders with future leaders.

Dr. Fowler and about a dozen other women were recognized for their leadership and contributions to the community. 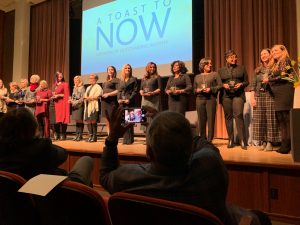 Dr. Fowler is the associate director of the Indiana University Center for Aging Research at Regenstrief as well as an assistant professor of medicine at IU School of Medicine. Through her research, she works to improve the quality of life for older adults with Alzheimer’s disease and their family caregivers. She is especially focused on supporting caregivers in medical decision making. Her work was recently referenced in recommendations made by an influential task force.

In addition to recognizing the women of inspiration, the event featured a panel discussion with female business leaders and allowed guests to network and tour the Women’s Suffrage Exhibit. The event also celebrated the 100th anniversary of the 19th Amendment.

The Indiana Historical Society hosted the event with the goal of establishing a platform where women can form connections with each other, share experiences and develop new skills for success.

Jul 28, 2021 • News
Foundation of trust needed to have successful shared decision-making on pain treatment
Editorial examines complexities of relationships and communication   A foundation of trust is crucial to help patients with chronic pain have productive conversations about pain management with their clinicians as well as better overall health outcomes, especially when it comes to opioids, according to a viewpoint article in the Journal of General Internal Medicine written by authors from Regenstrief Institute, the U.S. Department of Veterans Affairs and…
Continue Reading >
Jul 26, 2021 • News
Media coverage of health, especially disease screening, is often not sufficiently nuanced
The media covers health extensively, at no time more than during the pandemic. But that coverage often is not sufficiently nuanced. In a JAMA Internal Medicine commentary focusing on media coverage of disease screening, Regenstrief Institute Vice President and Indiana University School of Medicine Associate Dean Aaron E. Carroll, M.D., and IU School of Medicine…
Continue Reading >